Posted on December 4, 2014 by bennettkurt | Comments Off

On Monday 1 December, the Carpenter Rocks community hall hosted Amer Khan who gave a talk about the Southeast Shipwreck Survey Project (Figure 1). A number of the local community turned out for the presentation and later shared their knowledge about the area. This provided Amer with new leads, which will hopefully warrant further investigations along the southeast coast. Brad Duncan also gave a presentation on the William Salthouse archaeology project in Victoria. This demonstrated to the community what maritime archaeologists actually do and how unlawful salvage damages everyone’s cultural heritage. When shown pictures of destruction caused by relic hunters, many shook their heads in disbelief. Both presentations were well received by the attendees. 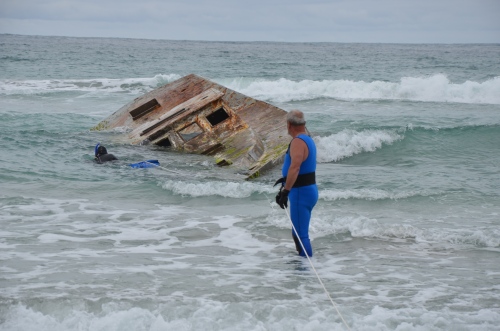 The research team revisited Pisces Star on Tuesday 2 December. Kurt prepared himself for snorkeling out to the shipwreck to assess the condition of the vessel. Due to the currents surrounding the vessel, the snorkeler was tethered to a divers assistant onshore (Figures 2 and 3). Using an offset method from a shore based datum, the onshore team recorded three points marking the stern, midships and bow section. Pisces Star, although shipwrecked in 1997, will be registered on the South Australian shipwreck database and information made accessible for future research. 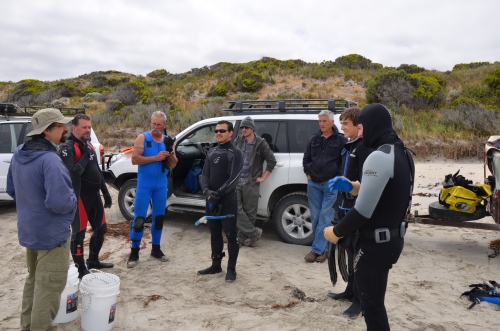 Next, the team surveyed an area northwest of Pisces Star, where a local abalone diver reported ship timbers. A swim line search consisting of five snorkelers, spreading 25m, covered an area of 150m to search for the timbers (Figures 4 and 5). No one located the reported timbers, but snorkelers observed five iron poles measuring 1m in length. Whilst the poles are cultural, they could not be linked to a shipwreck in the area. Carl and Gary von Stanke, local shipwreck enthusiasts, joined the team for the snorkel and shared their knowledge and history of the local shipwrecks.

Erie, the last vessel recorded on this expedition, is a 1940 clinker built transport vessel located at the north end of Lake Bonny in Canunda National Park. The survey team recorded the port (left) side of Erie measuring 5.25m in length. Unfortunately, the vessel was damaged by recent vandal activity where the port side had been pushed over and the keel snapped. Daniel, Kurt and Carl recorded the stem and planking using the baseline offset method (Figure 6).  In the short video below, Amer Khan talks about the construction and features of the vessel (*note—audio is quiet, it is recommended to turn up your volume).

On Wednesday 3 December, the survey team followed a lead of a possible shipwreck located in Cape Douglas. The site consisted of two timber posts, 4.25m apart. Daniel and Anthony excavated a 1m by 1m square trench around one of the posts to see if it was connected to other covered timbers (Figures 7 and 8). No other timbers were uncovered and concluded the posts were likely part of a slipway, jetty or fencing.

The project finished on Thursday 4 December, with the team driving back to Adelaide. In all, the project was a success with three vessels surveyed and will now be added to the shipwreck database. Other leads from the local community means, DEWNR will be visiting the southeast in the near future. Thank you to all the staff, volunteers and local community who have made the project go swimmingly. The whole week has been both educational and a joy—Carpenter “Rocks!”

by Kurt Bennett and Daniel Petraccaro