The Mallala Museum: Brilliant AND Creepy! 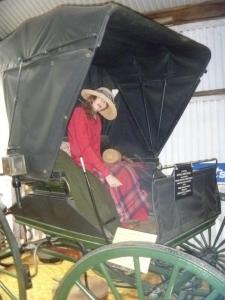 On a fair Wednesday night, after a long day in the field, many of the students (myself included) of the Flinders University Archaeology Team were winding down at the local pub. What a start to the night! A few beers and some chatter. But this is not what this story is about, it is what came next; a trip to the Mallala Museum to discover the exhibition that the local historical society had put on to display the past of their town. It was apparent the locals of the area had a proud passion for their history as was obvious with the large amounts of items on show from the past of such a small township. Upon walking through the front doors we immediately found something our team had not been able to find in the field; a complete artefact from the Seven Stars Hotel: a desk. This is one of the only known items from the Hotel. Moving further through the building, we come across a room stocked with items from the First and Second World Wars. This town showed its pride in this room, with pictures and original clothing from the wars all displayed elegantly. Next was the back room, which showcased various larger items such as old cars and fuel pumps. Finally, we discovered the upstairs room, which contained various knick-knacks, and a doll which looked like it came straight from a horror movie (pictured below). 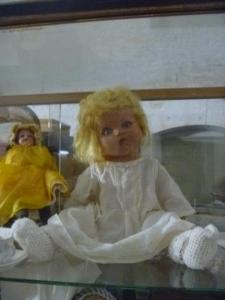 The Creepy Doll in the Mallala Museum

This doll caused distress among some, while others joyed at trying to cause more distress by getting people to look at it. It was then that many chose to leave the museum and as it got quieter, it became spookier. Thus concluded our tour of this fine museum which turned out to be quite educational and everyone learned something they did not know about the small town of Mallala. Now, back to the pub!

(Photos courtesy of Sam Deer, one of the not so distressed people)